You may recall that I once reviewed Mi-Clos Studio’s Out There and gave it quite a wrap.  The game had two notable features – it was very hard, and it was very well-written.

It’s fitting then that Mi-Clos’ next outing for Out There is a visual novel – very well-written, and far easier due to the general lack of gameplay.  And it’s quite good; although once again, only sci-fi fans and people who like reading need apply. 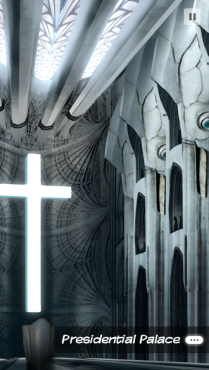 It’s set in the same world as Out There, but from a completely different perspective.  It’s far in the future, and strange creatures have detonated Earth’s sun.  In an attempt to survive, humanity has sent up “ark ships”, one from each continent.  The ships have no planned destination so they scatter throughout the cosmos, hoping to find a planet to settle.  You play Darius, a passenger from Ark Europa who (like the protaganist in Out There) is awoken after a million years in slumber.  Darius finds himself on a strange and seemingly paradise planet, settled long ago by the descendants of Ark America.  But Darius appears to have a secret past, and if Star Trek has taught us anything, it’s that paradise planets are never what they seem…

Let’s start by addressing the elephant in the room – is it a “game”?  Short answer – yes.  It’s a “Choose Your Own Adventure” style, which means it’s a game under pretty much any definition you choose to adopt – it’s interactive, it has some basic puzzles, it has win/lose states.  Personally I don’t think any of those things actually define a “game”, but that’s not what this post is about.

But I’ve called it a visual novel because not only is gameplay taking a back seat, on the few occasions it doesn’t, the whole experience suffers.  The “gameplay” normally consists of selecting one of a number of responses to various conversations, though sometimes it includes deciding whether or not to pick up or use an item, which locations to visit and whether or not to engage in a certain action.

Normally these choices are not real “choices” at all; the conversation will continue down exactly the same lines regardless of what you say.  We’ve all seen this before, in fact it’s pretty standard for most video-game conversations.  But sometimes your choices have real consequences – and it’s interesting to compare and contrast how that’s used, because sometimes it works well and sometimes it does not. 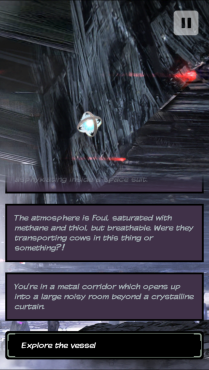 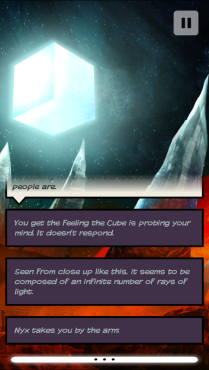 Let’s talk specifics.  Example 1 – how to get off Planet America.

When you first wake up, Darius’ inner monologue states he needs to get off Planet America as quickly as possible, for as-yet unspecified reasons.  There’s two ways you can do this – bribe the President or bribe your guide.

Bribing the President is not as obvious as it sounds – first you need to say the right things to the right people at the right time; and there are fairly obvious clues to help you through.  But if you make mistake, any mistake, then this door closes.  Fortunately the second option, bribe your guide, is a lot more straightforward, so if you make a mistake on the President front, the game can easily continue and you’ll wind up in the same position.

Compare that to example 2 – taking over a ship by force.

Once you get into space, you need to stage a one-man mutiny.  This requires you to get the right weapon, properly sabotage the ship, attack the captain at the right time and correctly deal with the ship’s AI.  If you make a mistake, any mistake, you die – and you have to go back to the start of the sequence and do it all again.

The first example seamlessly mixes gameplay and narrative; the second does not.  In the first example I get to engage my brain, solve some puzzles, but failure does not interfere with the flow of the story – the narrative, which is the real reason we’re playing this game, still works.  The second example also features puzzles but it’s an intensely frustrating experience – the constant cycles of stop/repeat destroys narrative, storytelling and immersion.  It’s like trying to read a book, but every three pages someone screams “WRONG” and forces you back two pages.

The second example is more “gamey” than the first, but it does not fit the experience.  Fortunately there’s not too many examples of that, but I suspect a lot of readers did not struggle through these passages.

If you can struggle through, then it’s well worth reading.  Like Out There it once again deals with the theme of lonely isolation in an unfair and uncaring universe, and while it’s not as well written, it’s pulp sci-fi, it’s certainly engaging and imaginative.  Interestingly the anti-religious element, only hinted at in Out There, is much stronger; the people of America are openly Christian and are portrayed as naïve and foolish for being so.  And it is hard to imagine a benevolent God in the uncaring world of Out There – because you don’t matter.

Take a look at the game’s very first words:

“It was a golden age and an age of death, an era of blossoming life and deepest despair.

Something hit our sun.

Beings with the power to crush a star must be so powerful that they are beyond our mere comprehension.  Do we spare a thought for the worms in the earth beneath our plough?  For them, the destruction of our civilization was nothing more than collateral damage.  Negligible…insignificant.

Our world was condemned.”

Shout out should go to the music too – which, like the music in Out There, effectively conveys the feeling of lonely isolation.

Overall, if you enjoyed Out There, or you’d like a bit of pulp sci-fi (and have a bit of patience) then you’ll like this game.  It’s not very long, and it’s not very expensive, so if you’ve got a bit of time to spare it’s recommended.  Just be prepared for one or two frustrating parts.

AND it’s a good time to buy it because Out There Chronicles – Part 2 has just been released.  I’ve bought it, so stay tuned for my comments on that in the near future.

Recommended if:      You liked Out There, or the phrase “decent sci-fi visual novel”makes you go “hey, that sounds interesting!”.  Note that you do not need to have played or finished Out There to enjoy this game.

Not recommend if:   The phrase “decent sci-fi visual novel” does not sound interesting.

2 thoughts on “Out There Chronicles (Completed)”