Mighty No 9 is quite fun.

It says something about Mighty No 9, and the internet in general, that this feels as comfortable as saying “I eat puppies”.  But my firm view is that if Mighty No 9 had been released minus all the hatred it would have been warmly received and probably have a little die-hard following, instead of the punchline that it now is.

It’s almost impossible to talk about Mighty No 9 without talking about its infamous development cycle.  So let’s do that because I like a challenge.

Mighty No 9 is a spiritual successor to the Mega Man series.   But I’ve never played Mega Man, so that means little to me.  Actually that’s not true, I played Mega Man 2 briefly as a child but found it too hard and frustrating to play.  I tried again as an adult with Mega Man 9 on the PS3 a few years ago and had exactly the same reaction.  So from my perspective, Mighty No 9 is already looking good compared to its predecessors.* 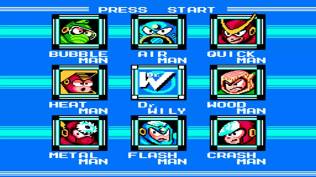 But while I don’t know Mega Man, I do know NES-era platformers.  And Mighty No 9 is definitely inspired by those, for better and worse.  Move from left to right, shoot bad guys, beat the boss, don’t fall down. 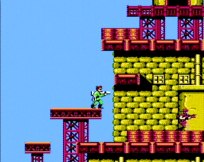 The interesting part is the “dash” move – when the player shoots enemies they don’t immediately die, they are first staggered, and then flash.  If the player dashes into a wounded enemy, the enemy is absorbed for a score bonus and a brief (and minor) power-up for the player.  The faster you absorb the enemy the more points you get (based on a percentage that ranges from 10-100%).  Each 100% absorbtion adds to your combo counter, with a satisfying “achievement” sound and golden combo-counter.  Alternatively you can just shoot the enemy again to kill it for no bonus.

This mechanic is brilliant, because it offers the player a constant risk/reward struggle.  Your weapons are long-range, and you’re vulnerable while you dash.  So if you dash into an enemy, you’ll get hit.  If you dash and wind up standing next to a new enemy, you’ll also get hit.  The obvious answer is to try and injure all enemies in a group at once, so you can dash into them all in one go.  But if you fire into a group of enemies and miss one…will you take the risk?  How well do you think you can judge the distance of your dash?

The dash also allows for some interesting platforming, because you dash horizontally very quickly with no vertical movement.  So you have a maneuverability that isn’t immediately obvious.

Each time you finish a level you get ranked from A – D, with “S” for a great success.  Your end ranking is determined not only by score, but combo, damage received, time and overall absorption percentage**.

Also, and this is the obvious Mega Man influence, each time you defeat a boss you’ll gain the ability to transform into a creature with that bosses’ powers.  There’s 8 bosses (excluding the end boss) so there’s 8 forms in total.  You can switch between forms at any time, although each form has a power level which decreases each time you shoot that form’s weapon.  The power bar recharges with time and, you guessed it, absorbing enemies.

You can tackle each of the game’s 8 initial stages in any order you want.  Each power makes one other stage (and usually its boss) a little easier, and the game will helpfully tell you which power is useful in each stage.  Each stage is typically quite unique too, each level usually has a different emphasis or some unique mechanic, such as jumping through traffic, or one level which incorporates “hide and seek” with a sniper.

The net result is a game that has a pleasant array of different experiences packed within a fairly short space of time.  I played this game over about 2-3 months, by finishing one stage each Saturday.  It was a lot of fun.

But, as you’ve no doubt heard, Mighty No 9 has its share of problems.  The worst of these come from the game’s 8-bit roots; there is a reason we stopped making games like this.  The main offender is an unholy trinity of 80s platformers – limited lives, insta-kills and cheap deaths.  It works like this: 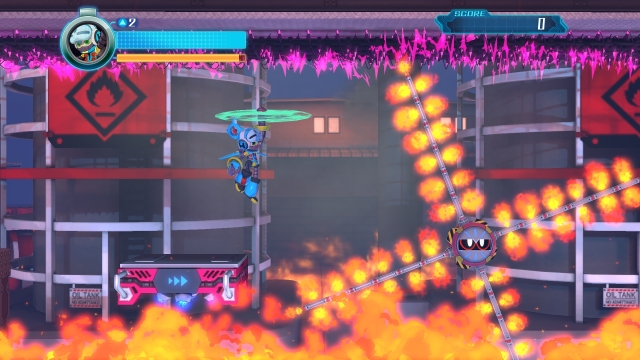 This happened to me so much in level 1 that I almost quit right then and there.  And I would not have blamed anyone else if they had done so.  I replayed that stupid first level so many times until I finally memorised the bosses’ movements well enough to defeat him.

But before you wail too hard on Mighty Number 9 for this, remember that it was standard game design back in the day.  Heck it was usually worse – in Probotector (aka Contra), if you lost all your lives you had to restart the entire game, not just the level!  And that wasn’t unique to Probotector, that was the norm!  Castlevania, Mega Man, Marble Madness, Jungle Hunt, Super Mario Bros, Sonic – I cannot think of a single platformer of the era that did not use that mechanic.  And don’t think they were above cheap deaths either – they weren’t.

But the mechanic sucked.  We got rid of it for a reason, and Mighty No 9 should have left it in the grave.  It ameliorates it a bit by giving you extra power ups when you re-start a level, and thankfully you don’t have to restart the entire game.  But it’s not enough.

Despite all the broo-ha-ha over this game, that is the only mistake that I think really mattered.  And I understand why they made it; if there’d put a checkpoint in each level just before the boss, the game would been a lot easier, and a whole lot of self-declared defenders-of-the-gaming-faith would have been up in arms for daring to make their beloved genre of 80s-style-platformers accessible to outsiders.  But it was the wrong call.

Also, lest we forget how annoying knockback can be.

There’s two other significant problems with the game, although comparatively they’re minor annoyances.  They are: 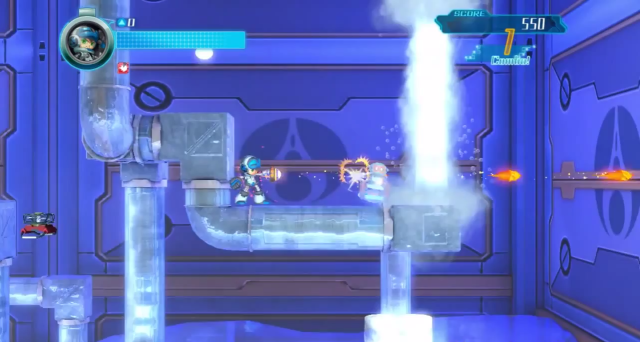 You will notice that I have not included the big issue that people won’t shut up about and that’s the graphics  (“Oh it looks PS2 era!  Quick, burn it with fire!”).  Now listen to me very carefully, because I’m only going to say this once:

I do not care about “graphics”.

And honestly, I don’t think anyone else cares about graphics.  Heck, Mega Man 9 came out in 2008 and it looks like this: 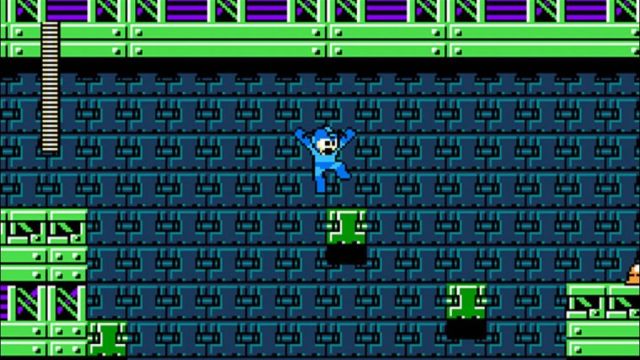 No-one jumped up and down whining that it looked like something from the past.  Mighty No 9 is not AAA, it was never going to compare with Assassin’s Creed XXII:  The Quest for Relevance and it’s not meant to.

The lower-res graphics match the game’s aesthetic, which is 80-90s children’s anime.  Which, let’s be honest, was done on the cheap and was never that good.

Now what is a valid criticism is that the game’s visual design is not great.  It’s not awful, but it’s insipid.  While I’ve never played the Mega Man series it’s quite obvious that despite the inferior tech its games had a much more cohesive and engaging visual style.****  Here’s a comparison with Mega Man X from the Snes era: 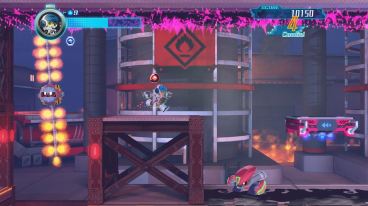 Both screenshots have the same amount of text (i.e. none).  But the Mega Max X screenshot has a clear location and visual theme (it’s on a skyscraper, he’s standing on a girder of said skyscraper, the world is dark and grimy).  Mighty No 9 is…well he’s supposed be in a fuel refinery, but last I checked oil refineries require machinery to refine oil.  They’d not just collections of cylinders…and how does the foreground fit in…actually where are we exactly?  And the background is dark-ish, but there’s a lot of bright pink in the foreground so the style is…what again?

But it’s only an issue that stops the game being great.  It doesn’t make it bad.  The visual style of Mighty No 9 is consistent enough and mostly serviceable (except on that one level where obstacles look like part of the background – that’s both annoying and unforgivable).  Put it this way – my toddler was fascinated with the robots in this game in the same way I was once fascinated with Astro Boy.

There’s two other criticisms often lobbed at this game that I’m going to deal with: 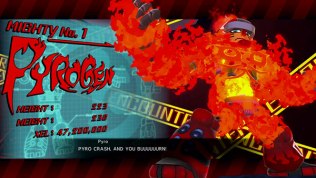 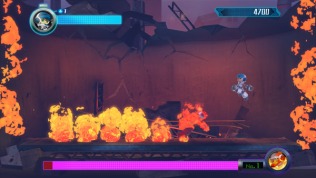 So what’s the wash-up?

Mighty No 9 is an above-average 80s/90s-style platformer, with a high barrier to entry courtesy of some remnants of 90s design ethos.  If you can get over that barrier, then you’ll find yourself with a fun little platforming challenge that has a surprising amount of depth to it.

But the existence of that barrier means that, much as I enjoyed this game, I don’t recommend it.

I am a very stubborn person and I like me a hard game.  Once I learned how the game worked (and got my first power) this game became a lot easier and I really enjoyed it.  But I suspect most people would not solider on, and I cannot blame them.

Recommended if:  You want to play a slightly modernised version of an 80s/90s run-and-gun.

Not recommended if: You’re not up for the initial frustration of beating the first level.

* Yes I know I should go back and try Mega Man again.  But I can only write of my experience to date.

** And probably some other factors that I can’t be bothered looking up.  But these are the obvious ones.

*** Qudos to the Well Red Mage, a true Mega Man fan, for the following comparison.