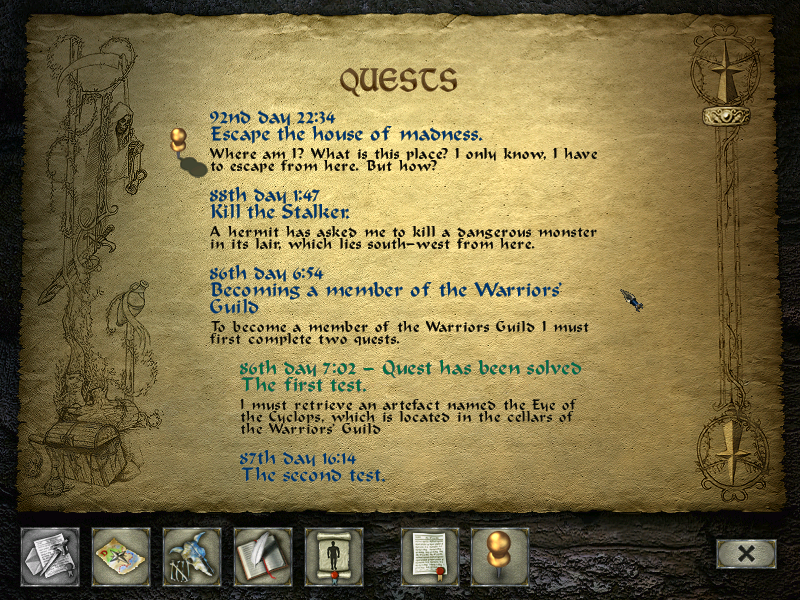 Another month, another game off the list.  This time it’s Divine Divinity – another 80hrs+ RPG – my backlog would be so much easier if I played something else.  It’s from 2002 so it’s comparatively recent compared to my usual fare, closest to Wizardry 8 (which came out in 2001).

Do I recommend it?  Yes.  In fact I prefer it to Wizardry 8, mostly because Wizardry 8 was 100 hours too long.  But in this post I’m going to talk about a problem that popped up in both games – pacing and challenge curve.  How do you structure the challenge and pacing of a game that,  by design, has no structure?

But before I get to that, let’s set the background. 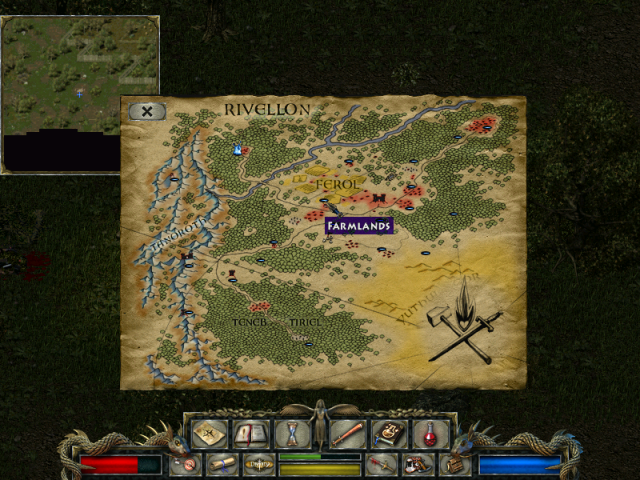 Why am I playing this game?

I didn’t want to buy Divine Divinity.  A while back I agreed to pay a co-op campaign one of my friends designed for Divinity: Original Sin II, which meant I needed to buy it.  And of course, because I’m me, I bought the “deluxe edition” which came with (inter alia) all of the original games.

Fate being what it is, the co-op campaign didn’t work.  So now I’m the proud owner of the entire Divinity series.  I suppose there are worse fates.

I’d been playing a lot of old-skool RPGs lately so I felt it was time to leap into the 21st century with the first in the series – 2002’s Divine Divinity. 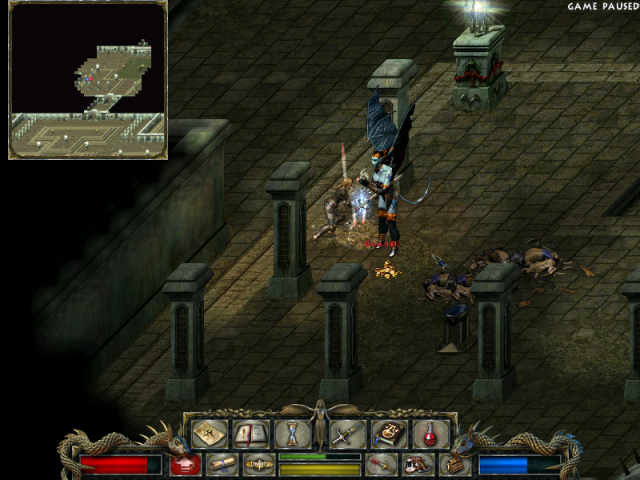 What is this game?

2002 was an interesting time for the genre.  We had just came out of the smash hits of the Baldur’s Gate series (and others) in the late 90s, but then in 1997 and again in 2000 the genre got a shake-up with Diablo and Diablo II.*

And with that, the RPG was never the same again.

The days of hard-number crunching or turn-based combat were out, replaced with the more accessible clickfests of the “action RPG” genre.  Put it this way – 2000 had Baldur’s Gate II, and 2001 had Baldur’s Gate: Dark Alliance.  The former a pseudo turn-based stat-heavy RPG, the latter a Diablo clone.**

Divine Divinity straddles the two genres.  On the surface it appears a lot closer to Baldur’s Gate – lots of numbers, lots of skills and a “pause” button, but in practice its combat tends to be bereft of any tactics other than “click a lot”.  Where it differs from Diablo though is the emphasis it places on world-building, exploration and conversation.  The emphasis is not solely, or even primarily, on grinding for loot.

The overall effect is of playing Baldur’s Gate with simpler mechanics and Diablo combat – and it’s not a bad combination.  Which is why, on balance, I recommend it.  It also has some pretty neat comedic touches in the writing that Diablo could desperately have done with.

So what’s this about problems?

Divine Divinity is an open-world RPG.  You are free to go and explore the world at your own pace, and find/complete main quests and side-quests at your discretion.  This is not uncommon.  What is also not uncommon, is that a game design based centred on having no design creates a specific set of problems.  Namely:

These issues affect different games in different ways.  Skyrim, for example, effectively deals with pretty much all of them.  Divine Divinity does not.  Let’s do a deep dive into why.

If you can undertake the quests in any order, how do you stop a player’s early quests from being impossible, or the later ones from being too easy? 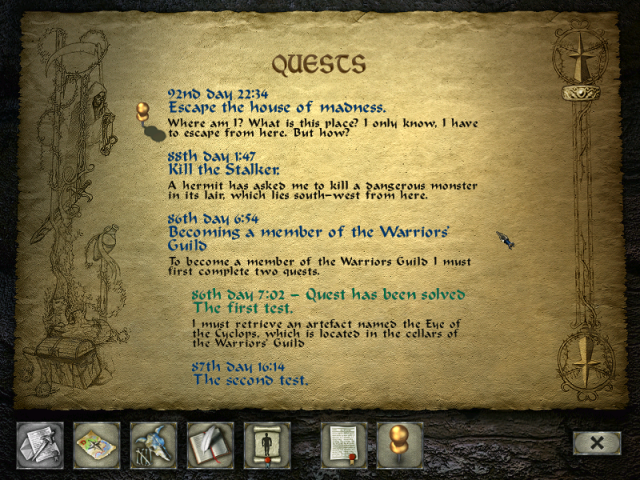 This problem broke Wizardry 8, which allowed you to tackle its dungeons in almost any order.  Skyrim fixed it by requiring the main quests be completed in a strict order, and by scaling the monsters in each new area to match your level.

Divine Divinity falls in the middle.  It scales enemies, but not a huge amount.  And while it technically lets you enter (most) dungeons in any order, it gives you clear direction as to which one/s you should do next.  That gives the designers a much better idea of how powerful the PC will be when they tackle each quest.  Occasionally it’s frustrating because you’ll get a number of quests at once, some of which will be way above your level and others not, but you can just change to a different quest until you level up – it’s never a major issue.

Common problems #2 – lack of urgency in the narrative

In Skyrim, this problem is almost laughable.  “Quick!  A god-eating monster is about to destroy the world…when you’re ready.”  It’s not alone with this fault – it’s a common complaint.

Many games just ignore this one – writing it off as an inevitable result of the open-world “explore at your leisure” style of game.  Others take active steps to fix it – the original Fallout probably dealt did it best by giving you a timer based on the Vault’s water supply.

Again, Divine Divinity falls mostly between the two extremes, although this time it’s to the game’s detriment.  None of the missions in Divine Divinity are in fact time sensitive – except two.  And it won’t tell you which two until after you’ve failed them.  It’s the worst of both worlds – if you’re going to impose a time limit on the player, that needs to be unambiguous, a la Fallout.

A special shout out should probably go here to games like Ultima IV that avoid this problem by not pretending that your mission is time sensitive at all – “your goal is to become the avatar of virtue.  Do it in your own time.”

Common problems #3 – lack of coherency in the narrative

Books have a beginning, middle and end.  But if you pull the pages out and randomly mail individual pages to someone, the end result is unlikely to be great story telling.

Again, Skyrim fixed this problem by making sure that the plot quests had to be completed in a specific order.  Sure this made the main plot a bit laughable or disjointed when you came back to it after spending 100+ hours picking flowers and buying furniture, but it was definitely a coherent story.

Divine Divinity doesn’t do that.  Sure it gives you the quests in “sets”, but you’re encouraged to explore, and when you do that the chances are quite high that you’ll complete some of the plot quests without realising it.  This meant that I was often being sent on quests that I’d already completed:  “Quick!  Kill the evil trolls and their troll king!  Oh, you’ve already done it?  Well…good.  Ok then.  As you were.”

The highlight of this for me was when, in an ancient dwarven temple miles undergrounds, its high priest sent me on a noble quest to seek the Holy Grail.  And I replied “I’ve already got one”.

How many RPGs have you played when you’ve put the controller down, turned the machine off and said “I am sick of aimlessly wandering the countryside”.  The original Zelda fell into this trap, as did many games of that era, such as the original Metroid and Ultima IV.  Exploration is great and all, but if you don’t give the player any direction it’s hard to care about it for too long.  Ask No Man’s Sky.

This is a problem I doubt anyone could seriously level against modern RPGs.  Skyrim certainly never left you in doubt as to where to go to advance the plot, although for an ostensibly “open world” game it tended to feel very “lead by the nose” at those points.

On this front, Divine Divnity nailed it.  The game encourages exploration by (inter alia) giving you quests that give you direction without the ubiquitous “pointing glowing arrow”.  But when you finally arrive in the relevant location, identifying what to do or who to speak to is usually straightforward.  You are not going to be laboriously checking every bush, like you were in Zelda.  But you will always feel like you’re organically discovering new locations, unlike following a Skyrim quest markers.

When a game has so many possibilities, bug-testing becomes impossible.  Skyrim’s bugs were legendary, and Bethesda had way more testing resources than little Larian Studios did back in 2002.  And don’t get me started on Troika.

So yes, Divine Divinity is buggy.  Unfortunately its bugs are less often of the technical “walk through this wall” kind and more often of the “why did this quest-central item vanish?” kind.

Fortunately the game has/had an active fanbase so workarounds are easily available – I had to use one when I killed a talking tree before I got the quest requiring me to do so.  But even then, it wasn’t a “plot quest” item, though I would have been annoyed if I hadn’t been able to fix it.

The balancing act – is it worth it?

Before Divine Divnity I’d never really thought about how much can be lost by having a true “open world” game design.  It raises the good question – is it really worth it?

The answer will of course depend on each game.  Yes, it’s worth it in Skyrim and Ultima IV because the feeling of exploration is central to the experience.  But in Divine Divinity I’m not so sure – the emphasis feels more centered on interaction with the game world as one giant, moving story with a strong central narrative (as opposed to Skyrim which has a central narrative and a thousand unrelated side-quests).  It definitely works, but my question is, is it worth it?  There are other ways to capture an “open world” feeling without really being “open world”.

Take Bard’s Tale II – your quest is to collect seven McGuffins.  But the seven McGuffin-dungeons are all hidden, and each time you complete one you’re given a hint as to where the next one is located.  So while technically you can go anywhere, in practice you won’t.  Similarly, while Wasteland allows you to enter any location at any time, the towns are laid out in such a manner that it’s pretty obvious the order that you’ll take – and if you deviate too much you’ll get squished by over-powered monsters.

On balance I’ll say – yes, yes it is worthwhile.  Divine Divinity puts a lot of effort into its worldbuilding and allowing the player to explore it organically makes that world feel more alive.  But I have four more games in the “Divine Divinity” cannon on my list – Beyond Divinity, Divinity II, Divinity: Original Sin and Divinity: Original Sin II.  It will be interesting to see whether Larian Studios changes tack.

Recommended for:  RPG fans are either looking for Baldur’s Gate-lite, or who are keen to try some older examples of the RPG but would prefer something fairly accessible.

Not recommended for:  People with no patience.  You’ll die a lot in the first dungeon, and the game tends toward the “slow boil” kind of pacing.

* Wizardry 8, for those keeping track, was 2001.  Its contemporary reviews referred to Wizardry 8 as being “old skool” (albeit using normal spelling), ironically because (inter alia) it had a first person perspective.  That’s “ironic” because that same factor now makes it look more modern, while its isometric contemporaries are more clearly dated.

**   I hasten to add that I like Diablo, and don’t believe that one sub-genre of RPG is inherently superior to the other.  but I think the fact remains that for many years one sub-genre (the Diablo RPG) killed off the other (the stat-heavy RPG).

15 thoughts on “Divine Divinity – problems with an “open world””