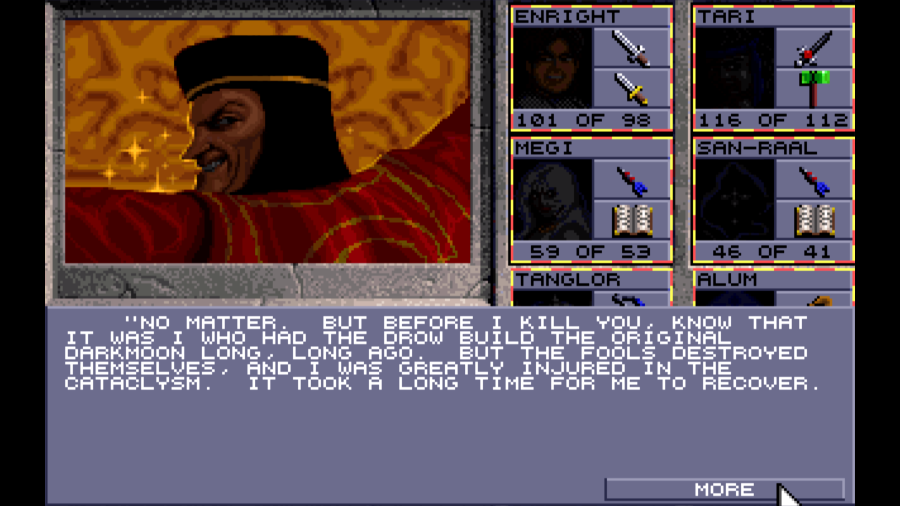 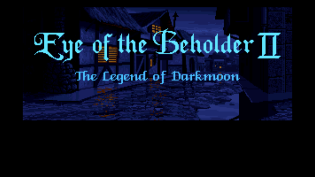 The Eye of the Beholder games were, apparently, a clone of Dungeon Master with a D&D licence slapped on.  They’re part of a brief 90s craze of combining first-person mazecrawling RPGs with real-time combat; that’s what Legends of Grimrock is harking back to.

The fad didn’t last too long until being replaced with the ubiquitous isometric approach taken in Baldur’s Gate et al; but of its (admittedly small) sub-genre, EoB were probably the best known at the time.  I haven’t played any of its contemporaries, but I can confirm that even after 30 years EoB I and II still hold an appeal; probably because of the seemless way they make the numbers-heavy approach of 2nd edition D&D feel so friendly and approachable.

Of the two games EoB II is definitely superior.  EoB I is a standard maze-fest with 10 levels of similar shape and size, and while it has some NPCs and plots it feels far more stilted than EoB II.  I think there’s three main reasons for that:

Both games have roughly the same amount of plot (i.e. very little), but EoB II sets up its basic premise with much more care than EoB I.  As a result you invest in the world from the beginning.  In EoB I you won’t even meet an NPC until about level 3, by which time the tone of the game is pretty much set.

Don’t get me wrong, those relationships are paper-thin and hackneyed as all hell.  But at least they exist.  The main quest-giving NPC in EoB II has a definite personality – a “wise teacher mage” type, and at least he has one AND (bonus)  clear relationship with you

The main quest-giving NPC in EoB I is a dwarven king, yet despite the more interesting set up, he’s a complete blank slate that feels he may as well be a note tied to a tree.

I’m not usually taken by graphical tweaks, but on this occasion I think it makes a difference.  Both games use a strict first person perspective, and the “real time” combat elements are intended to give a more immersive and “real world” feel than the strict turn-based combat of the time.  In that context, smoother animations of your own movement and of the monsters really helps to break down that barrier and make the game feel more alive.

So do I recommend them?  On balance I recommend number 2 but not number 1.  They’re both fun, but they’re so similar that there’s little need to play them both, so you may as well play the best one.  There is a number 3 that I am keen to try, although I hear it’s in fact the worst of the series.

One day I would love to play Legend of Grimrock, but as ever, the backlog beckons….

Recommended if:  You’d like a 90s dungeon crawl, but yu’d prefer something with a friendly UI

Not recommend if:  You want hard-core strategy, or if you don’t enjoy exploring dungeon mazes