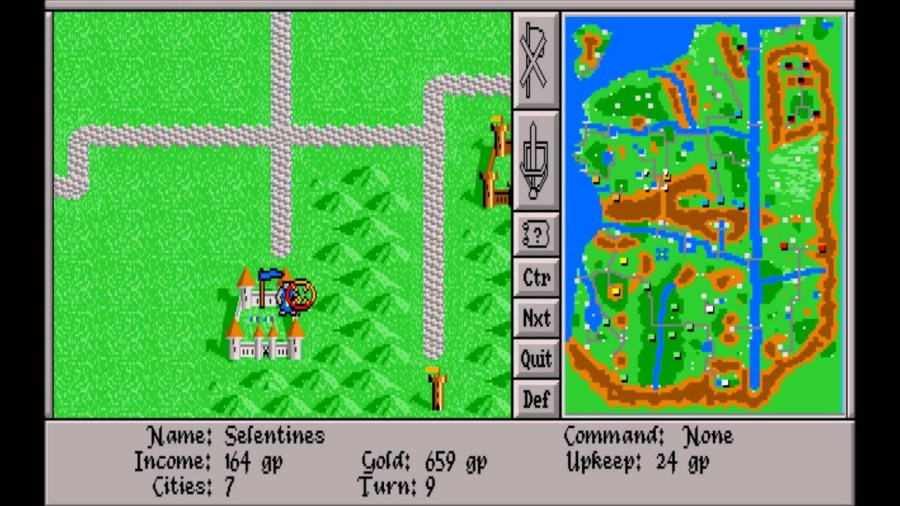 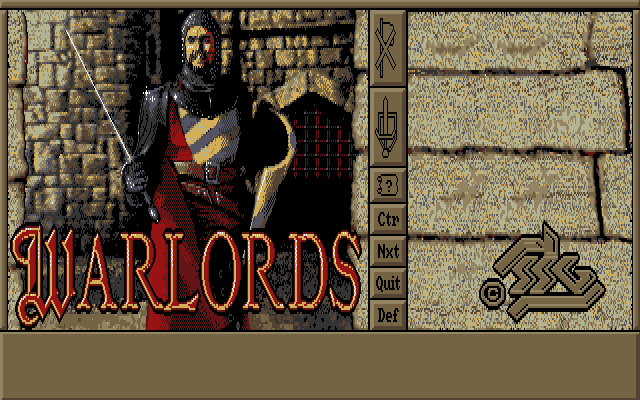 Today, I’m talking about the other Warlords  game, namely the 1990 fantasy turn-based strategy/wargame by Strategic Studies Group, who were the same people who designed Reach for the Stars, the original 4X game.  So it’s got a good pedigree.  Though it’s also the progenitor of the Warlords: Battlecry and PuzzleQuest games, so the blood obviously thinned with time.

You’ll notice I’ve called Warlords a strategy game and not a “4X” game.  That’s because it doesn’t have any exploration – the map is the exactly the same in each game, and both the map (and all troop locations) are fully visible at all times (at least in the default settings).  Warlords was quite popular in the day and successful enough to spawn a lot of sequels – I played it back in the day on my DOS PC, and a little while ago I was oddly driven to play it again (thank goodness for the internet).

So has it aged well?  Yes, although its AI has not.  The AI was fine when I was 14, but for an experienced gamer it’s too easy.  Which is a shame, because the game itself is quite interesting.  Multiplayer would probably be great, but good luck organising that past your 20s (it probably only provides for hotseat play too).

Warlords has three key strengths.  The first is that it is both streamlined and mechanically deep.  The map comes with a set number of cities, each of which can produce two or three different unit types.  There is no tech tree, no resources except gold, and limited options to upgrade cities.  So the city-management aspect is quite simple – you won’t be deciding whether to build new cities, what techs to research or how to protect your supply lines.  Even the units are streamlined – with only two stats, movement and strength.  Though in practice the unit types are very different, because the size of the map makes mobility a huge factor, and the different units have different movement and combat bonuses based on the terrain.  The end effect is a game that moves quite swiftly, yet still gives a fair degree of depth in terms of strategy.

The second strength is its asymmetric play.  It features 8 playable races, any number of which can be human, computer, or just turned-off.  Strictly speaking the “races” are all identical, the only difference between them is their starting locations.  But that makes all the difference – each of the 8 different starting locations make different types of troops, and different natural barriers (or lack of barriers) such that each demands a different playstyle.

It also means that if/when you conquer one of the 8 races, then you’ll need to adjust your current strategy to account for the new troop types and borders. 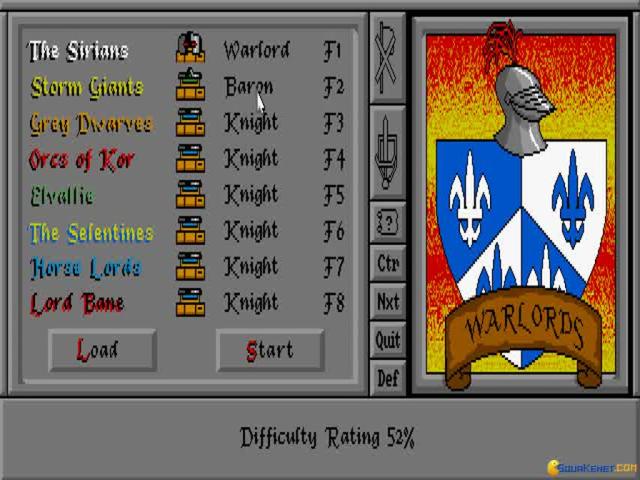 Finally, the game has a great fix for the “late game problem”, possibly the best I’ve seen.  That’s no small feat, even Civ wrestles with that beast.  The solution is quite simple – once you conquer a certain percentage of the map, all of the remaining races will sue for peace.  You can either accept and win, or decline and have all of the remaining AI players gang up on you.  This completely changes the game dynamic as formerly-quiet borders suddenly turn hostile, and the neighbouring kingdoms go from helpless victims to formidable foes within about two turns.  It’s the most interesting part of the game, and even the weak AI finally poses a bit of a challenge.

The biggest downside is the AI.  It won’t take too long for you to figure out “always win” strategies that the AI simply can’t respond to.  It’s a lot less interesting at that point.

On balance do I recommend it?  Yes, I do.

We often lament the “dumbing down” of gaming, but it seems to me that wargames are one area whether the trend has been towards complexity.  Warlords is not aimed at the die-hard wargaming crowd, and is far more approachable than (for example) anything Civ 4 has to offer.

There’s not too many games in the genre like that anymore.  So for that reason, it’s recommended.

Recommended if:  You’re interested in an approachable turn-based wargame

Not recommended if: You want a hard-as-nails wargame that’s incredibly realistic and requires several hours just to learn the interface.